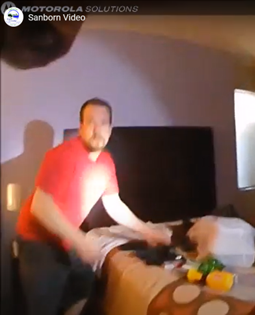 Coos County District Attorney Paul Frasier discussed the investigation regarding officers using deadly force at an incident from June 14th. The incident involved two officers who used deadly physical force against 37-year-old Matthew Tyler Michel, a suspect in a homicide that occurred on June 11th. According to Frasier, deadly force was used after officers with the Coos County Sheriff’s Office and Coos Bay Police Department entered the hotel room at Global Inn, where Michel was staying. Michel was the suspect in a homicide investigation regarding Amber Townsend who was shot on Cape Arago Highway.

During the course of the investigation, video footage showed Townsend was walking towards Charleston when a blue SUV traveling towards Coos Bay in the opposite direction. The vehicle did a U-Turn and then was later seen driving back towards Coos Bay at a high rate of speed. During the investigation officers found the rear license plate number and contacted the registered owner. Officers learned that the vehicle had been recently sold to Michel. While looking for the SUV officers found the vehicle at Global Inn and contacted management. Seen in body camera footage, when confronted Michel attempted to close the door and when the door was opened ran towards the bed where he grabbed a knife. Officers yelled for him to get to the floor and to put the knife down. Frasier stated that Michel moved towards Sergeant Sean Sanborn when two shots were fired. One by Detective Whittenburg and Sergeant Henthorne.

Michel was shot once in the right hip and one in the left side. He was transported to the hospital where he was pronounced dead as a result of massive internal bleeding. The investigation into the Townsend murder is ongoing, however no other suspects have been developed in the case.