The K-DOCK Staff has compiled information on this page to help you learn and survive an earthquake and tsunami. 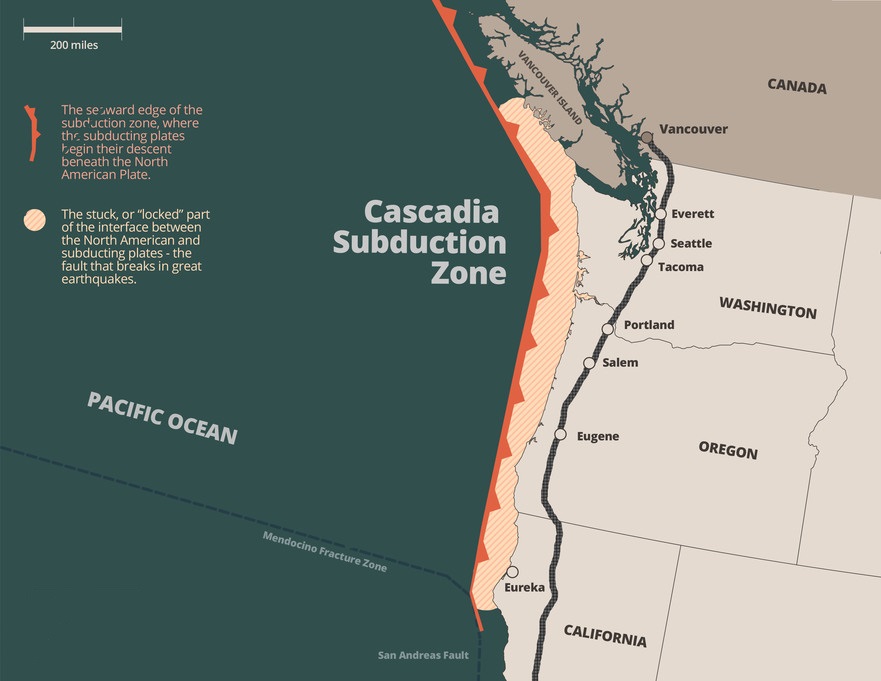 Cascadia has a rich and diverse history of earthquake activity, from the magnitude 7.5 event thought to have occurred in 900 A.D. along the Seattle Fault, to the more recent Klamath Falls (1993) and Nisqually (2001) quakes, to the hundreds of small quakes that occur every year but go mostly unfelt throughout the region. Earthquakes have struck offshore and inland, in small towns and busy city centers, in British Columbia, Northern California, Oregon and Washington. 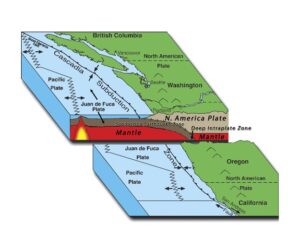 The Cascadia Subduction Zone is a 600-mile fault that runs from northern California up to British Columbia and is about 70-100 miles off the Pacific coast shoreline. There have been 41 earthquakes in the last 10,000 years within this fault that have occurred as few as 190 years or as much as 1200 years apart. The last earthquake that occurred in this fault was on January 26, 1700, with an estimated 9.0 magnitude. This earthquake caused the coastline to drop several feet and a tsunami to form and crash into the land. What is most surprising is that evidence for this great earthquake also came from Japan. Japanese historic records indicate that a destructive distantly-produced tsunami struck their coast on January 26, 1700. By studying the geological records and the flow of the Pacific Ocean, scientists have been able to link the tsunami in Japan with the great earthquake from the Pacific Northwest. Native American legends also support to the timing of this last event.

Oregon has the potential for a 9.0+ magnitude earthquake caused by the Cascadia Subduction Zone and a resulting tsunami of up to 100 feet in height that will impact the coastal area. There is an estimated 2-4 minutes of shaking or rolling that will be felt along the coast line with the strength and intensity decreasing the further inland you are.
The Cascadia Subduction Zone has not produced an earthquake since 1700 and is building up pressure where the Juan de Fuca Plate is subsiding underneath the North American plate. Currently, scientists are predicting that there is about a 37 percent chance that a megathrust earthquake of 7.1+ magnitude in this fault zone will occur in the next 50 years. This event will be felt throughout the Pacific Northwest.
With the current preparedness levels of Oregon, we can anticipate being without services and assistance for at least 2 weeks, if not longer, when the Cascadia Subduction Zone earthquake occurs. While this will be difficult to overcome, our citizens, businesses, schools, government, and communities as a whole can take steps to get prepared. Take action now by actively planning and preparing yourself and your community to be ready for two weeks for disasters.

What You Can Do to Survive!

For many years, we’ve been talking about the importance of being prepared for 72 hours. This is a good start, and helpful in the event of short-term power outages or temporary evacuation. But a large earthquake and tsunami will leave much of the area’s transportation routes destroyed. Oregonians will have to count on each other in the community, in the workplace and at home in order to be safe until responders can reach you.

Oregon’s Office of Emergency Management encourages people to be prepared to be on their own for a minimum of two weeks. This lessens the strain on emergency responders who need to focus limited resources on injured and other vulnerable populations immediately following a disaster.

Learn more in a CERT Class!

The Community Emergency Response Team (CERT) program educates volunteers about disaster preparedness for the hazards that may impact their area and trains them in basic disaster response skills, such as fire safety, light search and rescue, team organization, and disaster medical operations. CERT offers a consistent, nationwide approach to volunteer training and organization that professional responders can rely on during disaster situations, allowing them to focus on more complex tasks.